If I am not moving energy, what am I accomplishing when I insert an acupuncture needle into your dog or cat?

Let’s get a little science-y!

Other acupuncture points may not align with easily identifiable nerves, but have other connective tissue features in common:

When the Chinese were figuring out these points and channels, they did not know about the underlying nerves and anatomic structures, yet they figured it out indirectly through the “mapping” of acupuncture channels. I find that quite impressive!

So when we put an acupuncture needle into the skin at one of these points, what happens? The needle is stimulating mechanoreceptors in the tissue. These are special types of cells which are responsible for noticing things like pressure, temperature, stretch… acupuncture needles. Notice these receptors do not detect pain – those are a different type, called nociceptors. Our goal is to stimulate only mechanoreceptors, and not stimulate nociceptors, resulting in positive effects of acupuncture but not pain. (Occasionally some nociceptors may be stimulated as well, and if the animal is uncomfortable, we’ll take those needles out.)

These mechanoreceptors are each attached to a neuron, which branches off a nerve that ultimately connects with other nerves. Let’s diverge a second and review nervous system 101. 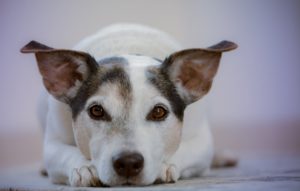 With many disease or pain processes, we have a chronic, low-level over-stimulation of the sympathetic nervous system, and we’d like to use acupuncture to tell it to calm down. Conversely, sometimes the parasympathetic nervous system is “asleep at the wheel” and we’ll want to wake it up. Either way, we can think of it is “restoring our factory settings.”

Back to acupuncture needles! We have a needle in the skin, and those mechanoreceptors are wide awake, sending the signal up the nerve. The message travels up the nerve to the spinal cord. Once it reaches the spinal cord, it can then travel to the brain. But how does a needle in a leg or foot affect something as unrelated as the digestive tract? Or how does a needle on the front leg affect the face? We need a place where these neurons can all intercommunicate. The technical term is a “somato-autonomic convergence center,” which describes it pretty well. “Somato” refers to the physical body (skin, muscles, etc) and “Autonomic” refers to the autonomic nervous system (sympathetic vs parasympathetic) we’ve been talking about.

It turns out we have just that kind of center! There is a section of the brainstem called the nucleus tractus solitarius (NTS). We can think of it as a “Grand central station” for nerves, since many nerves from a variety of sources end up passing through this region. Some of the nerves passing through the NTS are the Trigeminal nerve (Cranial nerve V), which communicates sensation from the face; Glossopharyngeal nerve (Cranial nerve IX), which carries signals from the carotid body (regarding blood oxygen levels and blood pressure) as well as sensation from the ears; and a variety of spinal nerves, which carry signals from the rest of the body (limbs, skin, etc). When these nerves are all in this tiny space, they can easily communicate with each other. This column of neurons is also very close and able to communicate with the dorsal motor nucleus of the Vagus nerve. This is big.

The Vagus nerve (Cranial nerve X) is the main parasympathetic controller for the internal organs. This one nerve has a lot of jobs: 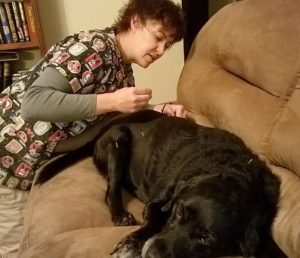 So we know the vagus nerve has a lot of responsibilities. And we know where part of it hangs out (in the NTS). So to communicate with the vagus nerve (and therefore the parasympathetic nervous system) we can use acupuncture needles to stimulate nerves at other parts of the body that have connections through the NTS. This is how a point in the leg can communicate with the stomach.

When we are using acupuncture needles to communicate with the autonomic nervous system, we aren’t only talking to one side and completely ignoring the other, the sympathetic or the parasympathetic. We’re talking to both. Even though there may be primarily sympathetic or parasympathetic nerves or connections at an acupuncture point, there is a never exclusively ONE nerve type. Think of it as a room full of small children. Some are playing nicely, or reading, or otherwise being good kids. There’s a couple that are misbehaving -let’s use playing with a lighter, for example. If you open the door to the room and say “What are you up to?” the kids who are behaving will likely keep playing as they were with a casual “I’m reading” or “I’m playing” while the kids playing with the lighter will immediately stop and probably respond with “Nothing!” The acupuncture needle is the adult walking into the room. The behaving system (usually the parasympathetic but not always) is not affected and keeps doing what it was doing. The sympathetic realizes it is too wound up (puts down the lighter), and starts the journey towards its neutral, default state.

How does acupuncture treat pain, specifically?

Acupuncture does more than manage the general sympathetic/parasympathetic balance – it can do a lot for pain using different mechanisms! Turns out mechanoreceptors are quite multi-talented.

Once the mechanoreceptors are stimulated by the needle, they send a message to the dorsal horn of the spinal cord. There are many types of neurons in this region of the spinal cord, and among them are fibers that relay pain sensations, called A-delta and C-fibers. Stimulating the mechanoreceptor increases nerve firing in the dorsal horn, and quiets these fibers down, reducing the sensation of pain. Furthermore, the signal from the needle travels up the spinal cord, through the spinothalamic pathway to reach the thalamus in the brain. The brain releases endogenous opioids (pain relieving chemicals produced by the body itself), such as B-endorphin. Conversely, as the processed signal travels back down the brainstem toward the spinal cord, other parts of the brain (such as the nucleus raphe and locus ceruleus, in the brainstem) release pain-killing chemicals like serotonin and norepinephrine.

The following review article spells out the details of the various mechanisms of action for acupuncture to reduce pain. It’s a long read, but an interesting one! https://www.ncbi.nlm.nih.gov/pmc/articles/PMC3947586/

This statement from the above article says it nice and concisely: “Electroacupuncture increases opioids at inflammatory sites via two pathways. 1) It activates sympathetic nerve fibers to enhance migration of opioid-containing cells to the site. 2) It triggers hypothalamus-pituitary-adrenal [axis] to decrease COX-2, which in turn interfere with endocannabinoid metabolism, leading to increased levels of opioids at the site.”

Finally, acupuncture can stimulate portions of the brain through yet-to-be-determined mechanisms. There are many fMRI studies out there of acupuncture and brain activity, but we need more research. Here’s a good summary of the current data (paper is 5 years old, but still good):  https://www.ncbi.nlm.nih.gov/pmc/articles/PMC3322129/

So I hope this little bit of science didn’t scare you off. And if you didn’t understand all of it, don’t sweat it! My goal was to simply explain some of the “behind the scenes” ways acupuncture works. We are not moving energy, but we’re talking with the body, reminding it to help heal itself.

Click here to register your pet prior to your appointment!